← more from
Glitterbeat Records
Get fresh music recommendations delivered to your inbox every Friday.
We've updated our Terms of Use. You can review the changes here.

The Age of Aquarius 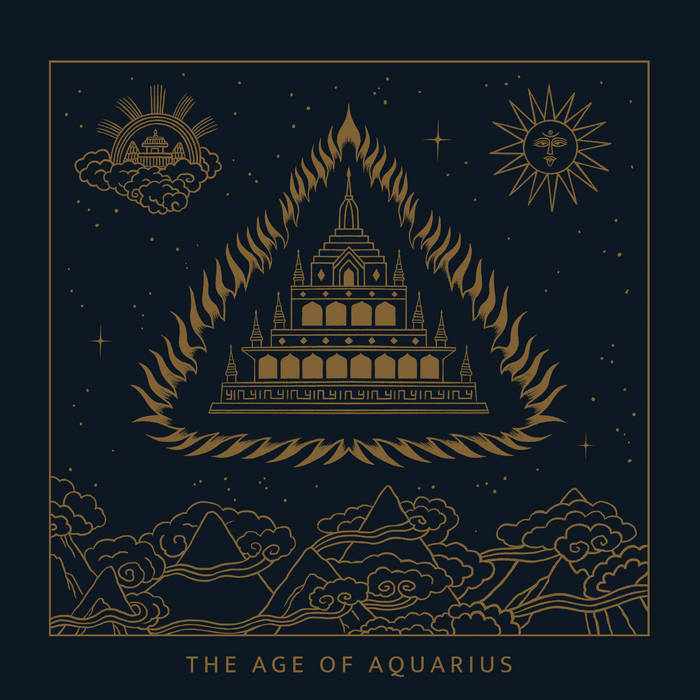 JP-3 more tropical funk from an island off the southeast quadrant of the andromeda galaxy. so hard to classify, but it's so good. a wild mash up of world influences that are brought together into a cohesive vision by these very talented musicians. Favorite track: Chong Wang.

Der Ohlsen "First and foremost this album is a labour of love, just pure love of music and the community music creates. And while their craft and sound successfully strive towards being very professional, you can still feel that Yīn Yīn aren’t taking themselves too serious."

my full review on Veil of Sound: veilofsound.com/2022/03/16/Yin_Yin-The_Age_Of_Aquarius.html

Zom Just listened to the full album, it was better than the debut! fantastic! My favourite track was track 5 but bandcamp won't let me select that one yet, goed gedaan!

Ben I Sabbah thank you for all these positive vibes, (in these strange times...) a beautiful balance between club grooves and experimental elements... fresh and funky! Favorite track: Faiyadansu.

“Yīn Yīn hop and bound along, being whisked up by the pure joy of their experimentation, unafraid to see how far from home it takes them...eccentric, boundary-bashing, genre-melding groove.” – The Line of Best Fit

While there is an expanded sonic richness on the new album as samples, drum computers and otherworldly synthesizers intertwine with the band’s taut playing, more than anything The Age of Aquarius is a simple, direct appeal to dance. The record’s groove manifesto can be put down to YĪN YĪN’s experiences on the road, where the positive energies picked up from their audiences fed back into a sound that increasingly “kept people moving.”

YĪN YĪN’s new long player, The Age of Aquarius, is a simple, direct appeal to dance. It is also a record blessed with a considerable hinterland; with cosmic time, long studio hours and a determination to transcend the daily ennui of living in the Dutch city of Maastricht all playing their part.

YĪN YĪN see themselves as a bunch of musical dreamers. The track ‘Declined by Universe’ references the fact that “we’re all kinds of drop outs.” The beautiful, old and somewhat staid city of Maastricht, where the band is based, isn’t really conducive to setting up a bustling music scene: and it’s a place where the outsiders quickly recognize each other. YĪN YĪN are all “nightlife people”, which meant their friendship initially came about through co-organizing and deejaying DIY parties. Before the band formed, none had carved out a conventional career, or done the “very Dutch thing” of completing their studies. Things started to move for real when Yves Lennertz and Kees Berkers decided to make a cassette tape that drew on references to Southern and South East Asian music. Once the idea was formed, Lennertz and Berkers wasted no time in taking “a lot” of instruments to a rented rehearsal room in a small village near Maastricht. There the pair set up a couple of mics and recorded a number of songs in three days flat.

Yves: “When we put it [the recorded session] out on tape, the reactions were very positive. So we decided to do a live show in Maastricht. We asked our musical friends to help us out, and from that night on we became a full band: with Remy Scheren on bass, Robbert Verwijlen on keys and Jerome Cardynaals and Gino Bombrini on percussion.”

This “united against the world” stance is also heard at the end of ‘Declined by Universe’, where the band claps their own music, making the track initially sound like a live track. It’s a funny, maybe surreptitious statement of belief in what they do. YĪN YĪN also wanted to create an illusion of strength in other ways: ‘Declined by Universe’ sounds as if there is a large group of people playing, not just the core band. This was done by passing over sampling in favour of live recording multiple layers of percussion. Yves: “In the end we were getting kind of silly and started applauding every take. We decided to keep that reaction in. I still visualize a sort of school building in Thailand where people are playing this when I hear the recording.” Maybe YĪN YĪN also see their position of a band hiding in plain sight in their own land reflected in the legend of Chong Wang. Kees: “Chong Wang is a historical mystical figure. Very little is known about him and some people even deny his existence. But we wrote a ballad for him on the first album and now dedicated another track for him.”

Regardless of attitude, the new record is bags of fun. Mainly because YĪN YĪN make dreamers music, in the sense that everything can happen, sometimes all at once. The working title was YĪN YĪN In Space, one that referenced the band’s inner vision of an entity that travels through space, encountering different planets, aliens, parties and galaxies along the way. Despite the name change, the music is still the soundtrack for that vision. And the intergalactic party vibes are strong. Nods to brilliant, invigorating dance music abound, some of the thumping beats in numbers like ‘Chong Wang’ the title track and ‘Nautilus’ drop some thumping 1990s-style electric boogie and italo disco chops along the way. Then there is ‘Shēnzhou V.’, which plots a stately course between eastern-inflected pop music, Italo and Harmonia-style electronic meditations. The record’s party vibe can also be put down to YĪN YĪN’s experiences on the road, where the positive energies picked up from their audiences fed back into a sound that increasingly “kept people moving”.

The expansive richness in sound and feel may also be down to the fact that more samples, drum computers and synthesizers are used on The Age of Aquarius than in their previous records, a process that intertwines with real-time playing in the studio. ‘Faiyadansu’, for example, started with a sample found on an old traditional Japanese koto record. Kees: “I first programmed a beat with 808 drums. Yves recorded guitars over that. Then we found some great vocal samples from a lady on YouTube who teaches the Thai language. These phrases and words all have something to do with enjoying food. The last step was to record some extra percussion on top.”

Cosmic appropriations of time also crop up in the titles, which may give the lie to some of the band members’ preoccupations with the state of the world. The Age of Aquarius is seen as a time when humanity takes control of the Earth and its own destiny as its rightful heritage, with the destiny of humanity being the revelation of truth and the expansion of consciousness. An old trope musically the Age is most famously referenced in the hippie musical, Hair. For YĪN YĪN it seems to denote the time when this record first took shape during the previous January, when the Age was meant to finally dawn. Other direct references to cosmic times are in the track names ‘Kali Yuga’ and ‘Satya Yuga’: the Kali Yuga, in Hinduism, is the fourth and worst of the four yugas (world ages) in a Yuga Cycle, preceded by Dvapara Yuga and followed by the next cycle's Krita (Satya) Yuga. It is believed to be the present age, which is full of conflict and sin. Who said this was just a party record?

Where to place YĪN YĪN on the map ? Maybe somewhere between Netherlands and South-East Asia, on an imaginary tropical island.

Bandcamp Daily  your guide to the world of Bandcamp

Semiratruth joins the show to discuss their latest release, "loading..".